From my beloved Aunt Esther, a postcard from British Columbia.  She and Uncle John were on a cruise up the coast of Canada, and then on to Alaska.  This would have been in the second half of the 1970s, but with my eyes and poor light I can’t make out the postmark year. 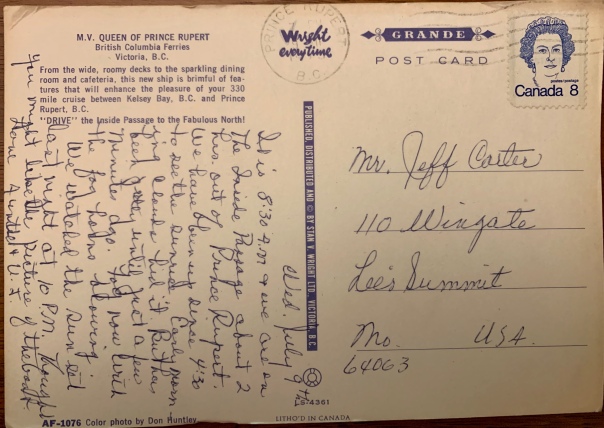 This lovely lady, gone six years now, would have been 108 years old today.

I miss her every day.

Thanks for your own letter this week.  I think of you often.  You’ve been more than an aunt to me in so many ways.  I’ve always held you more close to my heart than Flora, in part because of our physical proximity and in part because you were the grandmother figure who taught me how to cook and entertained my childhood imagination (vacuum cleaner hose, Battle Hymn and all).  Now with Ruthie gone and with Mom gone for over three years, I’m even more aware of how much a part you’ve played in my life these forty years.  As I put up pickles this afternoon I thought of Grandma and learning this art from her, but my Saturdays in autumn are ladled with memories of football days in Columbia, of your kitchen, of dinner at your table, of you and Uncle John and all those things that Columbia and Saturdays and that week in the summer was to me as a kid.  Sometimes now, as middle age firmly sinks in, those memories overwhelm me.  Thank you a thousand million times for being who you are.

Aunt Esther came to me in a dream this week.

She was as real my mind could conjure.

I was in the those early-sunrise hours, where random ideas and sounds and people dance in the semi-awake mind.  My alarm had sounded.  Somebody was making noise out on Lawn Place.  I heard the furnace kick on.  NPR was on the radio.

And I had rolled over for another 30-minute snooze.

We were in quarantine, Aunt Esther and I.  She was staying with me in a studio apartment.  And suddenly, in my right hand, I felt her soft, fleshy skin.  She said something I couldn’t make out, and then I was awake.

Aunt Esther had, in my memory, the softest skin that any lady of a certain age could have.  I remember she would take the remnants of the egg white from an egg shell and rub them on her face after clearing up breakfast.  She’d let that dry, and then rinse, all as part of her skin-care regimen.

Her hands and forearms showed no sign of really having worked the earth or toiled in labor.

And as a child, I loved holding her hand.

Truth be told, I did an an adult as well.

I’m taking her rêve visit as a sign that I am now on my 33rd day of not having touched any living soul.  Handshakes will be most welcome soon.  Hugs will be even more needed.

That same morning, I breakfasted on something I used to make at Aunt Esther’s neat little house on Clayton in Columbia — honey butter.

The table honey had crystallized, and I wanted honey with my toast, so I put the plastic bottle in some boiling water.  “It’ll be too hot to put on toast,” I thought.

And then I saw my butter dish.

So it was that a knob of butter and some hot honey were mashed and stirred until I had a childhood treat to put on the toasted bread (supplied by my friend D).

And happy was I.

I miss her so much.

I have a number of aunt Esther’s hand-painted originals. This one got pulled up from the basement this week to join the corner in my living room where it’s all about water.   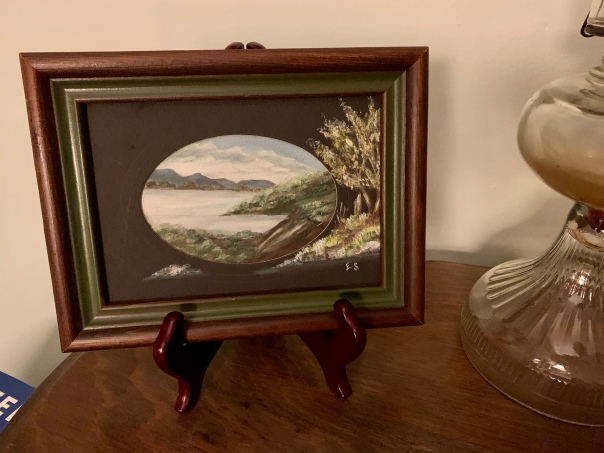 I spent Christmas Day with my sister Beth’s family in Lee’s Summit, and saw them again on Thursday.

Friday was a morning and early afternoon for me.  I got two Circus Harmony charts finished and posted.  And I went to the Nelson Atkins Museum of Art, more of which later.

Then Friday afternoon, for the first time in two years since father’s funeral, all three of us Carter kids and the children and grandchildren were in the same place.  Photos will follow later, but great-niece Lily finally warmed up to me: 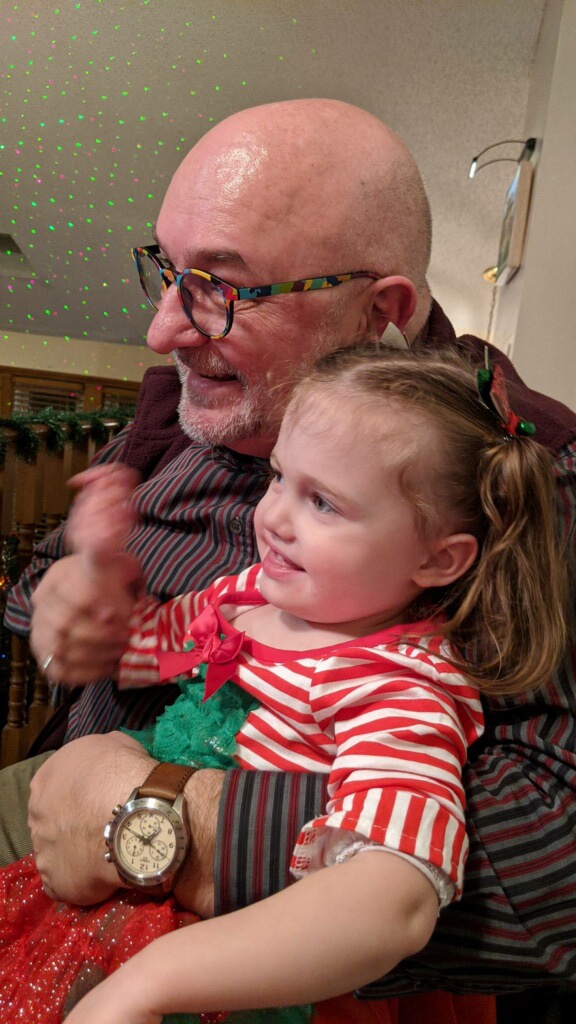 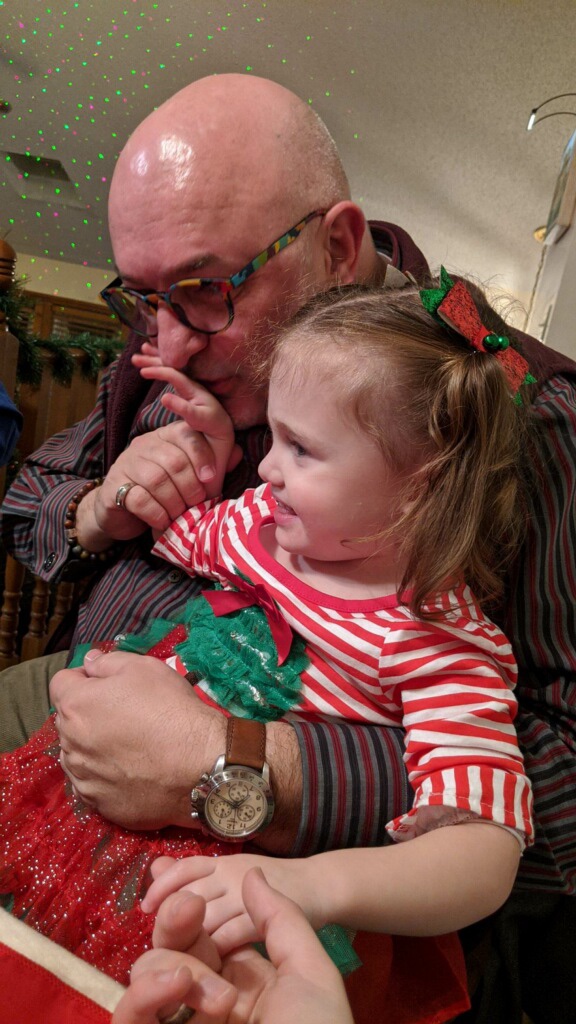 I only cried twice Friday during gift-giving.  Karen presented me with a memento book of scans of recipes in the handwriting of my mother Marie, G-ma Blocher, and Aunt Esther.  I was a puddle.

Then Beth passed along to me a fountain pen that had belonged by Aunt Esther’s husband John, one that after his death she gave to my father, along with a hand-written note.  To see Aunt Esther’s handwriting nearly six years after she died was just a bit overwhelming.  And what a joyous gift were both of these treasured items as well!

Aunt Esther Summers would have been 106 years old yesterday.  She died four years ago, just shy of 102.

This is the earliest photo we have of her, seated on the lap of Elizabeth (Miller) Ficklin, her maternal grandmother. 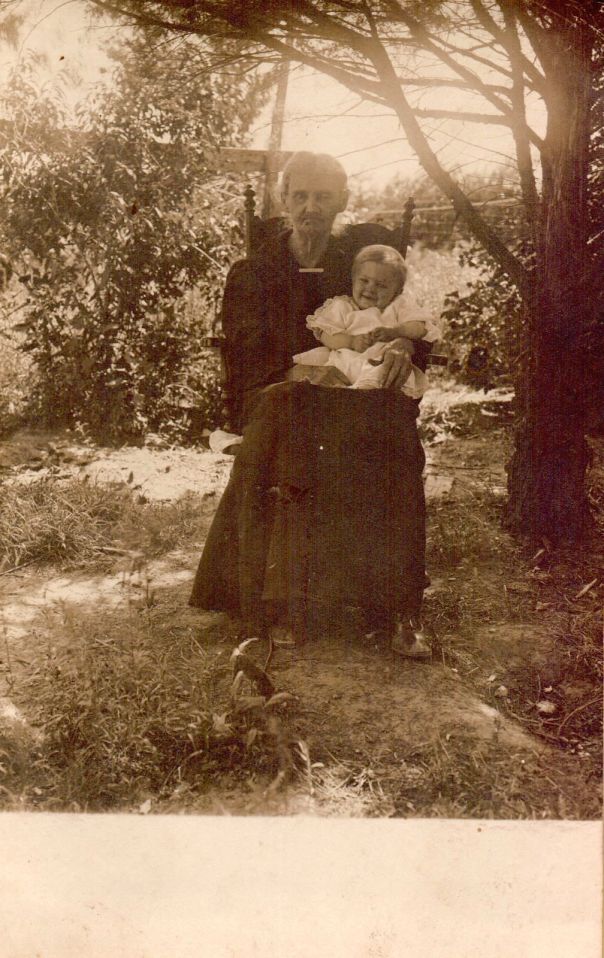 Four years ago today this sainted woman left us….

Amongst the items I inherited from Aunt Esther is this antique china cabinet.  This stood in the alcove in her dining room on Clinton Street in Columbia.

Filled with memorabilia from her life, it stayed with her at Foxwood Springs in Raymore, Missouri until her dying day.  And then a month later it found a home in my own dining room. 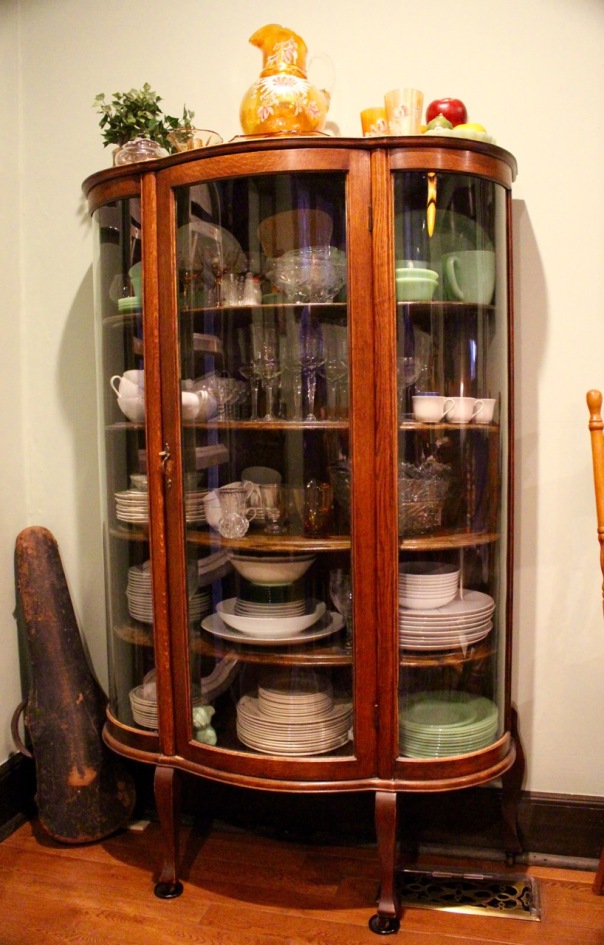 This china cabinet now holds priceless memories: my mother’s collection of Fireking Jadeite china, Grandma Carter’s formal china, Grandma Blocher’s stemware, a few pieces of Great-Grandmother Blocher’s china, some of my mother’s crystal serving dishes, serving bowls from various relatives, and so on.  Plus a lovely bone china set I purchased at an antique store in Indiana 15 years ago.

And sitting beside the china cabinet is my Grandma Carter’s violin.