Photos from the road today, aboard Amtrak 302 to Chicago from Saint Louis.

From the Saint Louis train station.

Having just crossed the Mississippi. 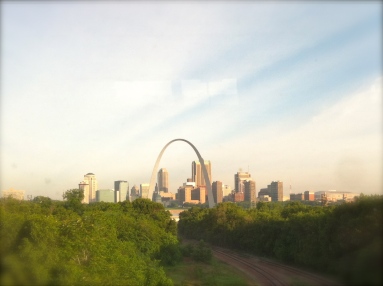 One of my favorite Arch views, only attainable from the train.

First sight of the Willis Tower from the south.

Earlier this week I visited with a prospective student who lives just two blocks from where I live.

Then on Thursday, near the back of the jet carrying me from KCI to San Diego, Rosemary Owens (voice faculty at Missouri State, and one of the grand dames of voice teaching in Missouri) sat down beside me.

That was after I saw Bart Shanklin, who interviewed me several years ago for a job at Southern Utah and who is now at Western Illinois, walking through Lambert on his way to another flight to San Diego.

Then this morning Larry Smith of Missouri Baptist University got on my elevator two floors below mine.

And then, as I was walking to my afternoon session after posting some cards, Jeff Pappas (formerly of Ball State, and now at Tennessee) hailed me.  We sat together in our afternoon conference.

The world is a small place indeed.

For the second time in as many visits, outside forces have transpired to keep me busier than I would wish in this Southwest oasis of bliss.  I did get outdoors for a couple of hours today, including a long walk and some time by the bay.

Gelato is one of God’s great gifts to mankind.

The Marine Ball is taking place in this very hotel this evening.  Say no more.

I spent $11.50 on a movie tonight.  But Lincoln was so worth it, especially in a respectful theatre filled with adults on a Friday evening.

The conference begins in earnest tomorrow.

And today I finished the first and most involved draft of our new departmental website, to be unveiled in about ten day’s time.

I found a huge hat shop tonight in the Gaslamp Quarter.  I shall go back tomorrow!

These people are funny, or at least Virginia Wilson, Program Director.

I received yesterday an envelope from Delta Sky Miles.  In it was a notice that I’ve not flown with them since July.  Then they offered me a chance to receive ‘premium’ magazines by using some of my miles.

I mean, really.  Can I not just let my miles accumulate?

I really didn’t cruise the Thames, but I was on a shuttle boat (a ‘clipper,’ as it’s called, although the boat type is a catamaran) on Tuesday en route to and from Greenwich.  After the crowdedness of the streets and buses and Tube, the ease of going by boat was a welcome relief.

I’m back at the hotel for a few minutes before heading to the Abbey for Evensong.  We have rain today, sometimes just a mist, sometimes a real pelter.  Walking is a bit more of a challenge thanks to puddles and splashing cars.  But I wouldn’t trade rainy London for most cities in the sunshine . . . .

In other news, the Duke of Cambridge was in the news today.

I made my way by bus this morning up to Holborn to visit the Sir John Soane Museum, and could have spent the day there were it not for other things on the agenda and some rude and unsocial French teenagers.  Getting on the Tube (now that the skies had opened), I went up one stop to Russell Square (singing the ditty from CATS, “Up, up, up past the Russell Hotel . . . .” as I stepped out of the station) and walked over to the Foundling Museum.  Think orphans.  Tens of thousands of them in the 18 and 19th century.  And Handel, who performed Messiah in 1750 in the chapel of the Foundling Hospital, and achieved even greater immortality.  The museum, still part of an orphan and child-service organization, has a wealth of Handel memorabilia.

These were both new stops for me in London.

I lunched in the cafe at the Foundling Museum – a ham and cheese and roasted pepper toastie, plus a piece of almond blackcurrant tart.  And then I picked up my books from Foyle’s, and took the bus back to Waterloo Station.

Evensong awaits in an hour, after which will be dinner with one of our Webster alums.

I’m just back from the Barbican Center, where I witnessed tonight a triumphant, energetic, all-out performance of Elgar’s First Symphony.

Morning Eucharist today, on the Feast of St. Luke the Evangelist, was appropriately enough in the Nurse’s Chapel, more properly known as the Florence Nightingale Chapel.  I loved the window and the oil lamp.  (Click on that link; the window is the third picture from the left.)

And then I made my way via the Circle Line up to King’s Cross to take the 9.45 a.m. train to Cambridge.  Once I arrived, I spent the next couple of hours at Trinity College and at King’s, in addition to a couple of shops.  Now, I love Cambridge so much.  It’s everything that I envision a British university town to be.  And since it’s the first of those towns I visited, way back in 1995, it’s also idyllic and romanticised in my feeble imagination.  (Like that British spelling?)

The King’s Chapel is the single most beautiful room in the world.  Period.  Nothing comes close to the centuries-old wonder and splendor of the fan vaulting and stained glass in this most amazing place.  My poor pictures cannot do it justice.

A short cab ride took me to the home of Sir David Willcocks and his wife Lady Willcocks (Rachel).  We were joined for luncheon by an old friend of theirs, Elizabeth, who was up from London for the day.  Luncheon itself was truly splendid, and Sir David was in great form with stories and reminiscences.  We later filled an hour and ten minutes talking about his life, and of course about Howells.  I have the whole thing on a memory card.  Let’s just say that when I left their home around 4 p.m., I felt like I’d been on Mount Olympus listening to a god.

Sir David is in his 90’s, but has amazing recall of events and places and people.  Their two dogs, Bonnie and Clyde, long-hair Corgis both, took an instant liking to me.  I missed Samson the Feist terribly all of a sudden.  My thank-you gift to them was a jar of homemade apple butter.  Lady Willcocks indicated this was something new to them; I do hope they enjoy it.  And of course I had Sir David autograph his autobiography for me.

After the 50-minute train ride back to London, I made my way to the hotel, ate a couple of samosas I picked up along the walk from Waterloo Station, took off my tie, and then set out for the Barbican.

This was to be a concert conducted by Sir Colin Davis, but he pulled out of this gig a few days ago.  I instead saw the youngish Russian conductor Vasily Petrenko.  And damn, he was smoking on the podium tonight.  This guy, all 36 years old of him, knows how to handle an orchestra.  I regret that I didn’t get a chance to see Sir Colin at 85, as this was likely my last chance to see him conduct, but I’m glad for the concert tonight!

It’s now 11, and I have another start tomorrow, so the rest must wait.

I have much to report about Gloucester this evening, but at 10.30 p.m., and in the hotel bar after a late dinner, I’m weary and ready to head upstairs.  So, I post some pictures of the outbound journey from Paddington Station to Gloucester!

I took the Thames Clipper service to Greenwich and back today.  The way up included photos; the return, video.  I’ll need to edit and prep the latter.

Here are shots from the outbound journey this morning at low tide.

Here are scenes from my road trip to Indiana and Ohio: