The Hassan II Mosque, as viewed from across the bay, near the point on the Corniche:

The movie Casablanca is an iconic one, filmed on a budget as a type of war propaganda, and now considered a classic.

Much of the movie unfolds in a fictional restaurant/gambling den in Casablanca.  Humphrey Bogart is the proprietor of Rick’s Place.

More then 10 years ago, the fictional Rick’s Place was constructed near the port in Casablanca.  Faithfully recreating the movie set, this restaurant is actually a fine place for a meal. I’m told they host evening shows as well.

My lamb and couscous was delightful.  Achraf’s salmon with mushroom risotto was even better.  And for about $60, we had entrees and drinks and an appetizer of goat cheese croquettes. 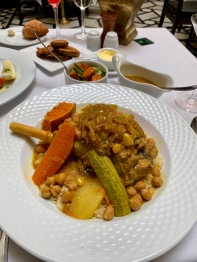 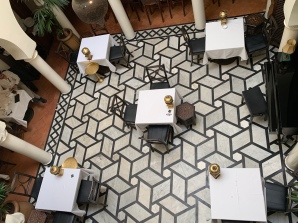