Here are more photos from Budapest, taken on Saturday morning: 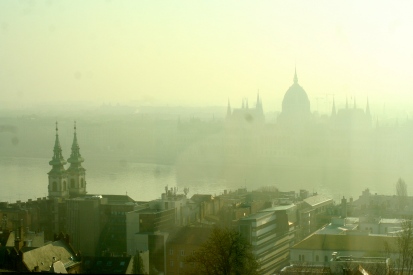 From my hotel room window, around 6.30 a.m. on Saturday 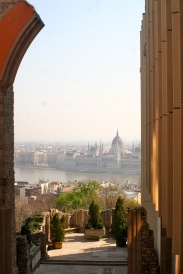 Leaving the hotel at 10, the haze had cleared.

En route to Vienna, aboard an OBB Railjet.

I will maintain until the day I die that rail travel is the way to go.  It’s civilized, quiet, and peaceful.  And first-class in Europe is not only relatively inexpensive, it’s very comfortable.

I have rarely felt more like a foreigner than I did upon arrival yesterday at Budapest Keleti.  My guide was nowhere to be seen.  I spoke nothing of the language, having not even bothered to learn ‘excuse me’ or ‘may I speak English?’.  The big issue is that I looked like everyone else, and was shy about being a tourist in a foreign city.  You see, at least in China or Taiwan or Malaysia, one stands out as a foreigner.  Here, I was just part of the crowd.  A lost part of the crowd, of course, but still one of the throng.

So I watched for a while, then changed money (helped by the largest woman I’ve ever seen in a chair, the size of a refrigerator box, so large that her upper arms were nearly an extension of her shoulders, and she only flapped around with her forearms).  And then I went to the taxi rank, where a driver told me the zoned price, and off we went.

The train station is in Pest, and the Castle District where I was staying in Buda.  After a taxi scrumble on the horrid pavement of a large thoroughfare, we crossed the Danube and started the climb up the hill on switchbacks, driving by ancient fortifications as we did.

The Hilton Budapest is apparently the only hotel in the world inside an UNESCO World Heritage site.  The hotel, built in the 70’s in the first big boom of new luxury hotels, incorporates an old Franciscan friary.  The concept is great, and the execution pretty fine in a non-original sort of way.  Pieces of the foundation are still in place, and elements of the Cloisters and the old arches of the nave are re-built to impart the outlines of what there once was.

(The train, now on the outskirts of Budapest, is passing by single-family homes with large garden plots out back.  On this Saturday, I am seeing many men tilling their gardens.)

And then my guide called.  He had missed me at the train station, so he came to the hotel, and off we went.

I had asked Csaba (a tall, lanky former flight attendant with several university degrees to his credit) in advance to provide me a historical overview specifically focusing on churches and architecture.  He planned a wonderful afternoon, starting with the Franciscan church at the hotel, continuing through the old ‘royal’ church of St. Matthias, right by the hotel, and then moving to Pest to end up with the main church, St. Stephen’s Basilica.  Along the way we encountered tons of Turkish influence, the history of the Danube, Roman ruins, large public squares, shopping districts, and enough adorable children to populate a small planet. I learned a great deal from Csaba, who clearly brought his training as a teacher and in urban planning to the tourist experience.

Csaba had warned me that we would be walking, and walk we did.  Aside from sitting down in three churches, and taking a short break for a beer, we were on the go the whole time.  So, it’s no wonder today that my right leg is tired from schlepping the boot, and that my left leg and hip are sore the walking.  I had trouble getting out of bed this morning, so weary and worn was I.

Having skipped lunch yesterday, I was grateful for dinnertime.  Csaba had recommended a restaurant near the hotel, but I found their menu too much of a haut experience, so I walked down the cobblestones (since cobblestones there were, everywhere), to a place named the Black Raven.  When I sat down on the front patio, I was the only customer.  By the time I left, the place was full.

And for good reason.  I started with goulash (a soup in Magyar terms), and wanted so to bottle the aroma and remember it forever.  Then the main course was the meal of the trip, a plate of bacon-wrapped veal medallions and pan-roasted potatoes with ham and a bit of sweet onion.  I was in omnivore heaven.  The cool weather, the view of ancient stuccoed buildings, the mélange of languages I heard walking by – all conspired to make this one of the most Romantic solo meals I’ve ever had.

Then the Gypsy band arrived.  The leader saw me entranced with the sound and walked over to play specifically for me (angling for a tip, of course, which I gratefully offered).  They played me the Brahms “Hungarian Dance No. 5” – the famous G-minor one that everyone will recognize – and Strauss’ “Blue Danube” waltz.  Most curious, though, was a ridiculous rendition of “The Phantom of the Opera” from the musical by Lloyd Webber.  That was a bit jarring.

Setting off in search of dessert, walking in the twilight, I found the restaurant overlooking the Danube already closed, so I took photos and people-watched, then went to the hotel for dessert.  Exhausted and happy, I fell into bed at 10 p.m., seeing at the last the Parliament building bathed in floodlights and giving the British Parliament a run for its money.

My Budapest adventure now over, I’m headed back to Vienna for one last evening, and a concert at the Musikverein this evening.

In Budapest, at 7.20 a.m., I’ve been up for an hour now.  The sun is streaming through the haze and into my window overlooking the Danube from high up in the Castle District. The Parliament Building is a hazy, Monet-like shadow.  The effect is pretty magical.

I don’t know why I always seem to be hungriest after the biggest meals, but I am hungry this morning, so I shall go to the breakfast buffet.  This is a lunch-less day anyhow.  I have an 11.10 train to catch, returning to Vienna before 2 this afternoon.

And speaking of food: last evening’s dinner was the best of the trip.  I stopped at a restaurant here in the Castle District, ordered goulash soup (the scent of which I just want to bottle and put in my kitchen forever), then dined on veal medallions wrapped in bacon, with pan-fried potatoes on the side.  Just as I was finishing my beer, a Gypsy-band (allegedly) stepped onto the patio.  They played traditional music, the Brahms’ G-minor Hungarian dance, Strauss’ ‘Blue Danube’ waltz, ‘If I were a rich man’ from Fiddler, and most curiously, the theme from Lloyd Webber’s The Phantom of the Opera.  I was enchanted.  And I tipped well. 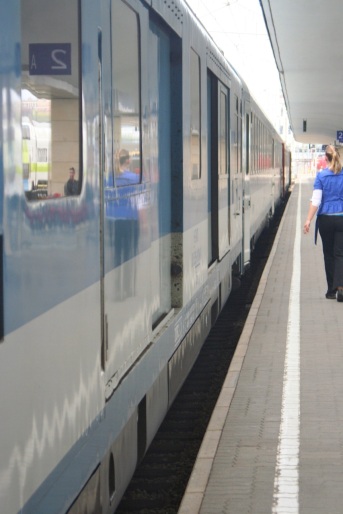 My train from Wien. 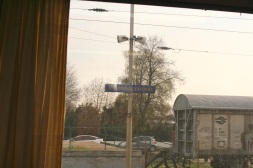 First sighting of a Hungarian sign, at the border. 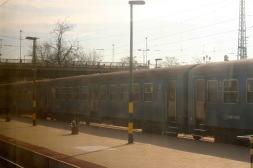 Passing thru a Hungarian city. 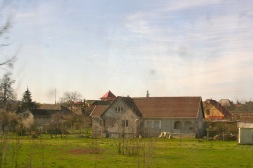 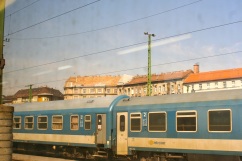 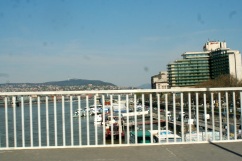 First sight of the Danube. 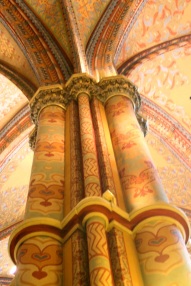 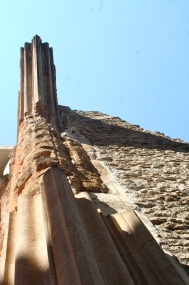 An old Dominican monastery, incorporated into my hotel. 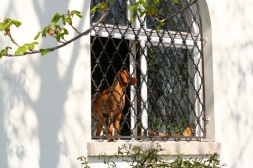 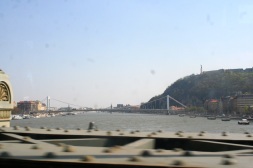 The Danube from the Chain Bridge. 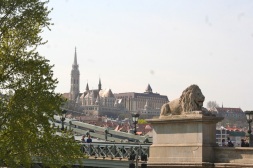 St. Matthias Church and my hotel in Castle District as viewed from near the Chain Bridge. 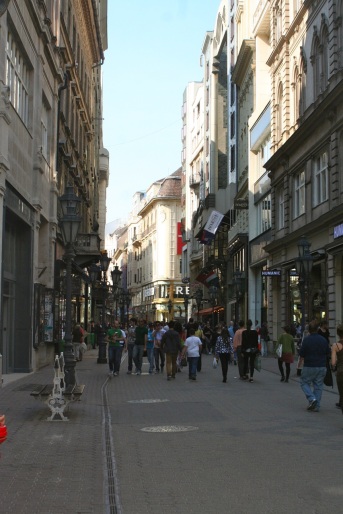 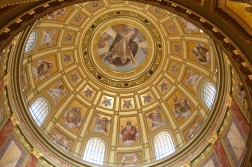 Me. St. Stephen’s Basilica in background. 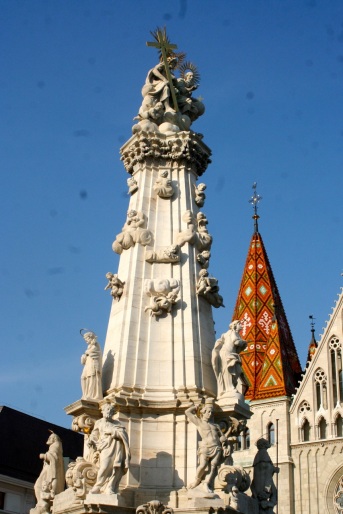 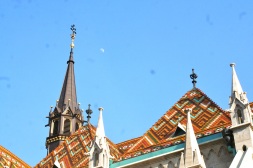 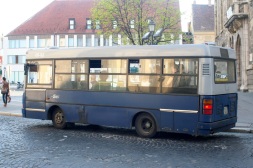 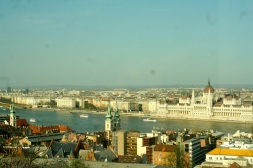 From the ramparts of the Castle. 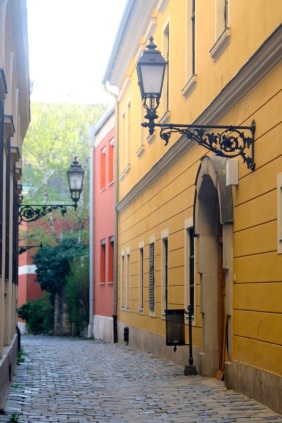 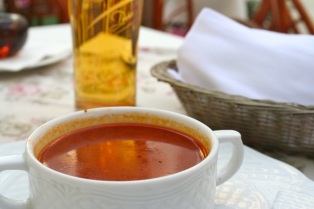 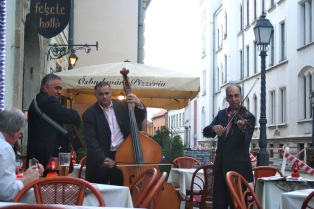 Parliament at night, from my hotel room window.

Dinner. The BEST meal of the trip, by far.

On the Castle ramparts, with Parliament across the river.

I’ll have much more up tomorrow.  At this point — 9.53 in the evening — I’ve been up for more hours than I wish, and I’ve walked a great deal.  My best need right now = leg up, and sleep.

I have arrived in Budapest.  And I can’t begin to describe how beautiful the view from hotel window is.  I’m in the Castle District, with a full-on, uninhibited, breathtaking view of the Danube.

More later.  I have to go be a tourist.