I watched the movie again on Saturday evening. 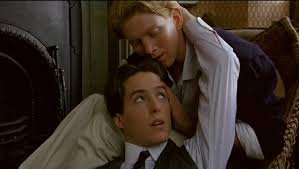 This . . . after listening to Mahler 2 live from Powell Hall (I had a ticket, but my coughing was going to be ugly, so I listened instead to the broadcast, and read the score as the symphony unfolded).

Saturday was an emotional evening . . . .

I call them my circus nephews.  And I recently gave their parents a night off for themselves, while I corralled the boys to San Jose Mexican Restaurant in Webster Groves, then out a far piece on Big Bend to a putt-putt golf place for two rounds, and then to Ted Drewes.  A good time was had by all.

Without my own family nearby, these guys are brilliant stand-ins for nephews.  I get them hopped up on sugar, teach them a few choice words, then push them out of the car back at their parents’ home!

A story, then a funny.

I am the chorus director for the Variety Children’s Charity education program.  I’ve worked with special-needs kids enough to know they are often quite honest, and forthright about their needs.

This year we have two singers with cochlear implants.  One of them brought his microphone to first rehearsal.  The mic hangs around my neck, and since it’s unidirectional, it picks up my voice and Bluetooths it to the receivers for his implants.

This week the other student brought her mic.  I watched as she synced it to her own receivers, and then I wore the mic for the entire rehearsal.  And she was engaged more in what was going on as a result.

Technology is cool.  And wonderful.  And a god-send at times.

And these are new experiences for me.

One of our singers is a very outgoing, chatty, and very honest super-senior.

Monday evening, I kept messing up the words on a song.

And she kept calling me on it.  “Dr. Carter, you sang ‘him’ again when it should have been ‘we.'”

After the third or fourth time, I just said “I’m a bad conductor!”.  Smile on my face . . . but acknowledging that I’m a mess that evening.

She, to me and the whole group: “No you’re not.  You’re just making a lot of mistakes.”

The room erupts in laughter.

I LOVE THESE KIDS, AND THE MUSIC WE ARE MAKING TOGETHER!

The culprit may or may not be in this photo:

Let’s end the week with a laugh. And with sheer perfection.

Thanks to Leona Schaefer for posting this on Facebook last week!

Scene: a dog is to perform a few tricks.

Sadly, the dog doesn’t like her costume, and refuses to perform.

Finally, after two acts of the circus show are finished, her sulking over, Miss Maple delivers the goods!

This coming weekend marks the 40th anniversary reunion of the Lee’s Summit High School class of 1979.

I am not able to attend.

My four years in high school were delightful in many, many ways.  From my perch 40 years later, I recall some very fine teaching from dedicated professionals who opened my eyes to history and science and literature in particular.  My music education was superior, both at school and in private piano lessons.

I excelled at music, and found a home of sorts as one of the geeks who did stats for the basketball teams.  And I lettered in both music and sports!

Coach Matuszak, Mrs. Simpkins, Mr. Berlin, Mr. Voss, Mr. Ballentyne, Mrs. Ford — these are names and faces I remember with fondness and affection. Several other faces flicker in my memory, but the names have now escaped me.

I was part of a group of music/drama types who generally got along well.  Many of us were church people too.  My tightest group were classmates with whom I had gone to elementary school, or who were church-mates at First Baptist Church.

I was picked on by some of the upper crust, but never bullied.  I despised a few of the athletes, and didn’t understand the kids who smoked or drank.  But I generally got along well with others.

I was pretty pure back then. Alcohol didn’t touch my lips until I was 23 years old.

Lee’s Summit was a safe place to grow up.  The memories of my days of formation in that town, and at Lee’s Summit High School, are overwhelmingly positive.

Sadly, my schedule doesn’t allow me to be gone this weekend, with alumni weekend performances at Webster, a full day of teaching on Saturday, and Saint Louis Symphony Orchestra performing Mahler on Saturday evening.

I wish my classmates well, 40 years on!

From a show on Sunday at the City Museum:

The show was so much fun on Sunday!  Come see these flying children most Saturdays and Sundays at the City Museum.