A time of day I do not wish to see.

But jet lag and traveling across time zones tricks the body into all sort of curious reactions. Mine right now is sleeplessness. I’ll regret this later today.

The sky is still dark night, of course. The streets of Moscow, in this area on the first ring road, northeast of Red Square, are nearly devoid of cars. Unlike New York City, with the clatter of trucks all night through, and a steady stream of something, Moscow does seem to rest at night.

And the giant Atrium shopping mall is open, as a matter of course, until 11 p.m. daily.

So the body clock is wired differently here.

I shall now tell a story on myself.

Our work done for Thursday at the Conservatory, my Greek colleagues and I piled into the school car with the taciturn security driver, Dmitri (or Dmitry, as I’m uncertain of the local spelling). A long drive in later-afternoon traffic brought me back to my hotel. The plan was to rest for a bit, then meet Susie and Alex, both from Athens, at Tchaikovsky Hall for a performance by the Moscow Philharmonic of Mozart’s Don Giovanni.

Alex texted to say that I needed to be there at 1940 hours, and I should allow 40 minutes for traffic. I looked on-line to verify the location and found the concert was at 1900 hours — one hour earlier than I’d been told.

So. Yikes. I brush my teeth, pull on my suit jacket and overcoat, and descend 17 floors to ask the concierge for a taxi. (Foreigners do not hail taxis here, but instead prearrange a pick-up at a pre-agreed fare.). The concierge suggested I take the Metro. “Very simple.” And in theory, the concierge was correct.

Here begins the woe-filled portion of the tale, told in bullet points:

Chatting up the bartender last evening, after ordering a vodka tonic:

“Do Russians think it sacrilege that I order a vodka with tonic water?”

“Well, we don’t drink it that way, but most Americans do.”

I ask “And you don’t think we’re just filthy foreigners?”

“I tried it last year, and vodka with tonic is pretty good.” Quick answer. Puts me at ease. “But you know what I like better? Vodka with Sprite. I can chug that and get drunk faster.”

Sidebar: When the bill came later, I realized that my double vodka tonic had cost more — far more! — than my most excellent tagliatelle with Bolognese for dinner. Vodka is allegedly tasteless, but this was somehow one of the best vodka tonics I’ve ever tasted.

Perhaps I will try to sleep again.

Thursday was a fairly clear day in Moscow, although I spent all of afternoon indoors. Here’s a view from my hotel room at dusk:

And from dinner, a very happy-making double vodka, plus a delicious lemon tart at dessert: 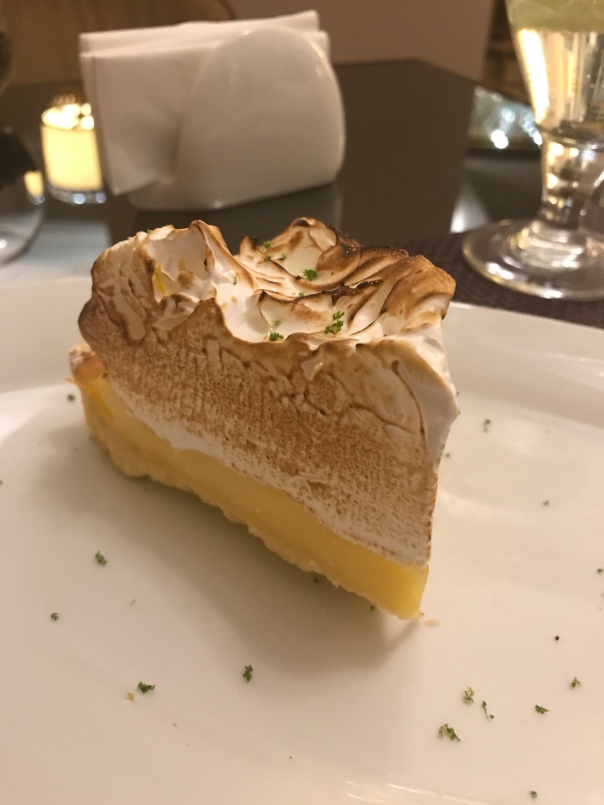 But do stay tuned for stories of why the vodka tonic, coming to this blog in three hours….

Here’s a photo of her, with her mother and her grandmother, when I was an infant.  The photo was taken in Coushatta, Louisiana. We were all dressed for church.

How have 20 years passed?