There are reasons to oppose bringing Syrian refugees to America.  None of them are good reasons.  Most of them are sickeningly racist.  And all of them are deeply, obviously, blatantly and clearly unChristian.  You cannot object to helping these people and call yourself a Christian.  Jesus himself would rebuke you.  He already has, in fact.  Reread verses 41-46 if you need to.  If you refuse to help the sick and the destitute and the needy, you are going to Hell.

There is literally no way to make that any clearer.  Christians are commanded to help those who are in need.  Not requested.  Not asked.  Not begged.  Commanded.  In plain and clear language.  By Jesus.  There’s no way to wriggle out of this, folks.  You either help these people– or, to do the absolute minimum, get the hell out of their way– or by the words of the man you consider the son of God you are going to Hell.

Here’s the whole read:
In which I tell you how your religion works 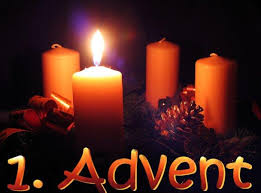 I’m a four-season guy.  And in the liturgical calendar, I’m an all-season guy (except for Pentecost, which just seems to drag on sometimes).

But my favoritest season of the church year is Advent, which began at sundown last evening.  This time of expectation, of cleaning up, of preparation, of hope . . . this time fills me with some undefinable quiet joy.

E’en so, Lord Jesus, quickly come,
and night shall be no more.
We need no light, nor lamp, nor sun,
for Christ shall be our all.

Two photos from Thanksgiving evening.  He napped on my lap for about an hour.  This was the first time he has done so.  Yes, he was worn out from the festive company of the day, but I’m also inclined to think that every day we bond a bit more.

I hit the jackpot when this little guy found me.

Turkey breast before and after:

Stuffing before and after:

And I must say: I was plum wore out Thursday night.  The children left, and I took a 90-minute nap.  That much cooking and doing was a delightful but tiring chore.

I spent Thanksgiving evening watching the live stream from Hesston College and their annual Thanksgiving concert, this year featuring combined Hesston forces in Haydn’s The Creation.  The stand-out?  Ken Rodgers at the harpsichord, of course!

My breakfast today was the BEST use of leftover mashed potatoes.  Just mix in an egg, cook like a pancake, and add more pepper and some sour cream!

This was my Wednesday at the office.

At 2 p.m., I left for a more-peaceful-than-expected Costco.  Pumpkin pie.  Dinner rolls.  Milk and eggs and sugar and cream.  20 lbs. of potatoes.  Some blackberries.  Booze.

This was my haul.

And then I drove north on I-270 and east on I-44, taking the Hampton exit and cutting over to the Schnuck’s on the Hill. The parking lot was not as full as I expected, either.

Walking in the store, though, I was assaulted by horribly-out-of-tune saxophone playing.  Apparently members of the Maplewood Kiwanas Club were trying to raise money, and selling some homemade popcorn.  Their hook was the ancient man playing sax, accompanied by a trying-to-keep-up-with-the-drum-sound-on-the-keyboard guy.  I mean, this was movie set comedy bad.

And then, somewhere between the celery and the yellow onions, I melted. The older woman next to me was humming along with the dying sax.  I was too.  For one magic moment our voices joined together under our breaths. “May your days be merry and bright . . .”, we hummed.

And all was right with the world.

I spent the rest of my minutes in the store saying “Happy Thanksgiving” to complete strangers, smiling and thanking the staff who were everywhere and harried on this busiest day of the grocery year, and generally atoning for my ill will toward the sax player.

Cutie season has arrived. I have five pounds of them on the kitchen table, along with a few rogue limes.  Happy is my kitchen, and delighted is my palate.

Way back when I lived in Muncie, I played marches through my earbuds to try to keep me on pace and I walked the neighborhood and took exercise (sometimes).

Augustus Rex is a walker.  He needs several outdoor stretches each day.  And I am walking him on a leash.

Sousa marches are too fast, clocking in quite often at around ♩= 120 beats per minutes.  That comes in at two steps per second, which is a bit rapid for Auggie and quite too much for me.

So I go instead with parade marches, such as the “Colonel Bogey March” and other British quadruple meter marches. These come in a ♩= 90, a much better pace for both of us.

I’m loading tons of these British marches into the iPhone, and enjoying some marching music with the mutt.

He likes the fireplace.