I can remember a handful of times when waking up in a foreign land was just about the most happy thing in life.  I recall opening the window in Brazil to the sight of a mule-drawn two-wheeled cart painted in gaudy colors (this on my first-ever out-of-USA trip); the mist in the valleys in the Genting Highlands in Malaysia; zoo workers receiving their morning instructions, after mandatory exercise, in Beijing; the coast of Greece from an overnight ferry, seen through a cabin porthole; the raucous congregation of birds screaming their hellos in the orchard, just underneath my hotel balcony in Sorrento, with Mt. Vesuvius looming in the background, scarcely visible in the nascent light in Italy.

This morning that happiness: roosters — hundreds of them, from the sound of it — heralding first light, and awakening me.  Watching the sunrise as I stood on my balcony, eyes to the east over the crest of the 585m peak in the distance.  Marveling at the whitewashed homes and buildings, the red tile roofs, the everywhere-you-look peaceful cats.

Hydra is a delight indeed.

The breakfast spread at the Leto Hotel is sumptuous.  I feasted on some sort of local egg concoction, ham (thin-sliced European-style bacon), three kinds of bread (and could have tried 15), a big slice of cucumber, some cheese, white grapes . . . and some of the best coffee I have ever tasted.  That this feast was taken underneath a maple tree in a courtyard, with quiet chatter in three other languages all around me, was a bonus.

Yesterday afternoon I just sat at a harborside taverna for nearly 90 minutes, thinking nothing in particular as I watched the world go by.  Laziness and heat causes life to slow, sometimes.  Such was the case yesterday.  This morning, without the heat, I sat at breakfast for 45 minutes and sipped coffee in unhurried silence.

And I can feel my contracted mind relaxing, or so it seems.  Certainly the left wrist is feeling better — just marginally, but I notice a change.

Last evening I witnessed something right out of a movie: three older (truly!) Greek women in plain black dresses.  They were seated on a bench by the harbor.  And they were just taking in the evening peace, occasionally exchanging a few words.  Their lined faces were aged with weather and the ever-present harsh sunshine.  They were from a world very different from my own; in some way they reminded me of my grandmother whose skin was leathery and wrists were thicker than mine, thanks to daily toil for decades.

One does not see power lines here.  Somehow the town’s infrastructure has disappeared.

OK . . . looking out of my windows, I do see power lines. But not many.  And they tend to run along alleyways, high up on the two- and three-story buildings, rather than alongside the few main roads, most of which are wide enough for only two horses anyhow.

I visited today the Lazaros Koundouriotis Historical Mansion, a local site, part of the national museum.  Koundouriotis was apparently important in the Greek war of independence in the early 1800s.  His home is high up on the hillside, and caused me a great sweat on the journey there. 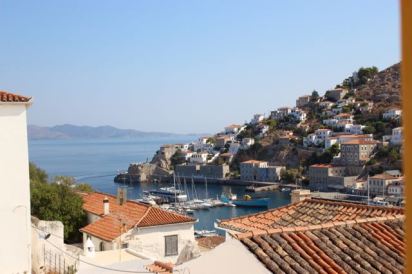 From his front door.

Dining room. I want this ceiling so badly.

He apparently had but one working eye. 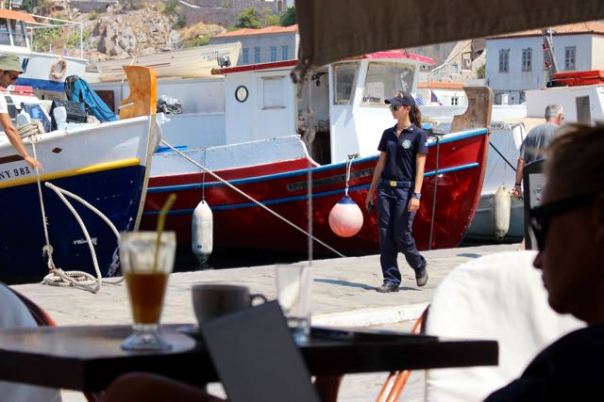 Waterfront on a busy Saturday.

Part of the city hall complex, much of which was formerly a monastery. 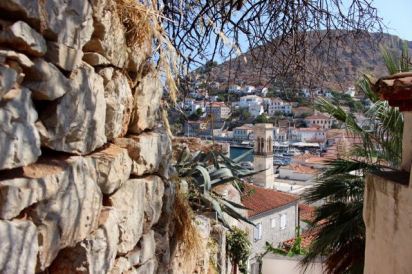 From high up on the mountainside.

From the battlements by the port. 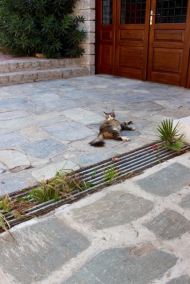 Cemetery on the edge of town.

Olives will be harvested in October.