I returned from Lincoln yesterday about 5.30 p.m.  All is well in the world.

Samson was glad to see me, and snuggled beside me with haste.

The lawn wasn’t in horrid shape.  Mail had not piled up too much.  And Charlie took good care of the house.

I work hard this week for four days, then take a month away from school.  But I’m thankful that my evenings are totally free this week!

Here are three shots to finish the Lincoln trip, two of the major lightning storm to the northeast on Saturday evening, the other of the decadent lunch that was my last sin on this trip.  Healthful eating resumes now. 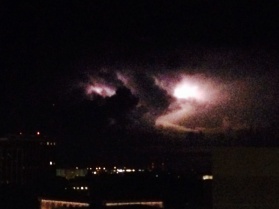 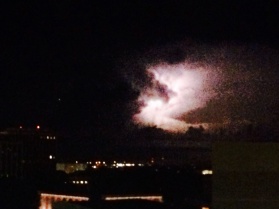 NPR’s article about the origins of the waltz. . . .

Who knew that what we think of so elegant started off as so dirty?

Today would be my mother’s 76th birthday. Here she is 52 years ago!

This is our last full day in Lincoln.

I’ll be glad to be at home soon.  I’m not sleeping well.

But the conference has been wonderful, and our callbacks yesterday were super.

I broke away from meat and potatoes yesterday.  Lunch was at an Indian restaurant; dinner, a Thai place.  But lunch today is the rest of a club sandwich from Thursday, and dinner is steak!

Here are some photos:

Charlie the Housesitter sent me this pic of Samson the Feist this morning.  I miss my puppy. 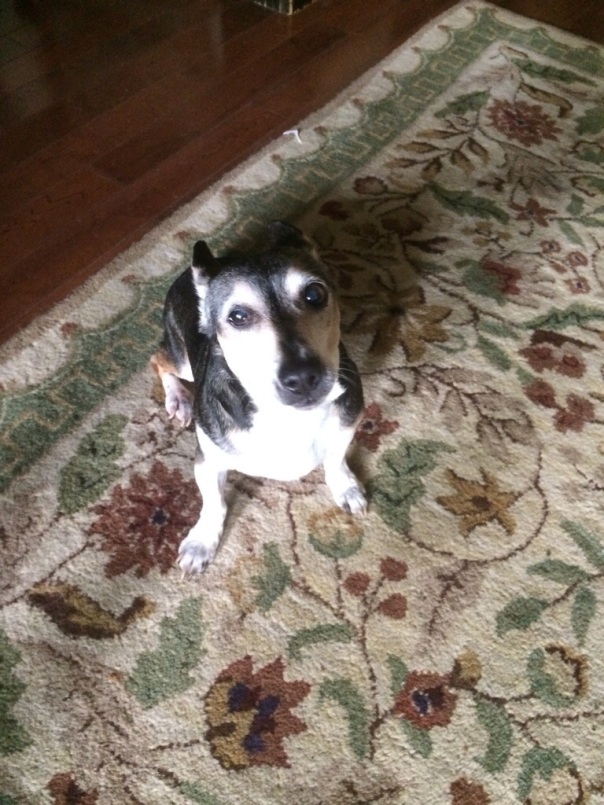 We had another six hours of auditions yesterday, making for a brutal afternoon and early evening.  But we saw some wonderful talent, and the future of American theatre looks bright!

Today is a full day of callbacks, then a production this evening of Fiddler on the Roof.

Adam was a voice student of mine when I was still teaching at Music/Arts Institute.  He was a pup then, but a talented one.  He briefly considered a music major at college, but opted instead for Philosophy at William Jewell.  An Anglophile (like me!), Adam spent a year at Oxford.  He took a Nursing degree.  And he is now ABD on his Ph.D. at the University of Nebraska, doing something unpronounceable in Biology.  He deals with statistics that deal with algae, and some attempt to turn something about them into fuel.  (Truth be told, I understood, but I can’t clear it all up enough to relay the info this morning!)

Adam is now 30.  I haven’t seen him in a decade.  He’s funny and smart and very much like the kid I remember, but now with facial hair and the easy demeanor of a guy who’s found his place after traveling the world for a bit.

I’m so glad to have dined with him, and shared a slice of pizza and a local brew.

In other news, Bruce and I heard five hours of callbacks yesterday.  And I spent some time at the exhibits.  And did some Webster work.

And my knee is bothering me, so I iced and elevated it last evening after all was done.

Today = back to the audition room!

On Tuesday evening I posted a blog entry on my voice teacher blog, with the entry containing a listing of all the audition songs I had heard in the previous two days.

As of this morning, that blog entry has over 750 hits.

Wednesday morning in Lincoln.  Today is call-back day.  And then another round of auditions commence on Thursday.

I’ll spend 5.5 hours this afternoon in a small hotel conference room, just me and a colleague and a parade of high school seniors who may be interested in a theatre or a music degree at university.

And I’ll be very happy!

This evening, before going to see a 10 p.m. live performance of Catch Me If You Can, I will take dinner with Adam Voshall.  Adam was a voice student of mine many years ago, starting with me as a cambiata and moving to bass.  He and his mother traveled to London with me (more than 15 years ago!). He lives now in Lincoln, and I’m certain that I’ll delight in catching up with him after a number of years.

Dawn has sprung, lovely and clear.  The first full day of Thespian convention is under way.

After spending five hours on school calendar and website yesterday, I set out with several others for five hours of thespian auditions for colleges.

At some future point, I’ll have a list of audition songs we heard, along with a bit of commentary.

Here are photos from yesterday: 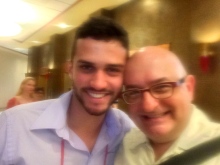 With Jocelyn at auditions.

Peter’s ID badge is blinged out.