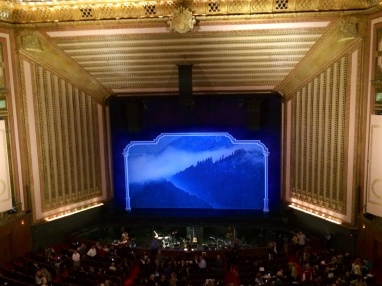 My view from the Dress Circle.

With the Mother Abbess, Christine Brewer, after the performance.

Chicago Lyric’s production of Rodgers and Hammerstein’s The Sound of Music plays through this week at the grand and ornate Opera House on Wacker Drive, hard by the river in Chicago.

I saw the production last Thursday night.  The ushers had sent me, in error, to the front row.  “I don’t remember buying these seats,” I kept saying to my evening companion.  Well . . . I hadn’t.  I belonged in row B of the Dress Circle, not of the Orchestra.  So I had great seats, and in many ways better than front-row center.

Now full disclosure: I have seen at least two dozen stage versions of TSOM. I walked out on one national tour in the late 1990’s.  A decade before that, I played Uncle Max twice in a three-year period.  I know this show.

And the Lyric mounted a lush, expensive, sumptuous production, with star casting in Billy Zane as the Captain, Jenn Gambatese as Maria, and my friend Christine Brewer as the Mother Abbess.

The show has received positive-to-glowing reviews from the Chicago press.  As often happens, the audience is speaking loudly: the Lyric has added extra performances, so high is the demand for tickets.

My own review is more mixed.  I was glad to be there, and found the production very strong, but still lacking and occasionally mis-directed.  Christine sang the spots off of ‘Climb Ev’ry Mountain.’  And much of the singing was very good.  The acting, though, wasn’t necessarily up to code.

Ms. Gambatese was recently Glinda the Good Witch in the national tour of Wicked.   I’m saddened that she brought some the Glinda mannerisms and snickers and squeals to the role of Maria.  But she sang . . . oh, did she sing!  One of the choices for TSOM is simple: do Maria’s solo songs in Mary Martin’s original keys, or the higher keys for Julie Andrews and the movie version.  Ms. Gambatese had the vocal chops to pull of the high notes, and she electrified us as she went for broke.

Billy Zane, a movie star, is not a trained singer, but he held his own . . . most of the time.  And he looked wonderful on stage.  Early notices didn’t care for his chemistry with the Maria, but clearly the two have grown into a pair.  At a key moment in Act Two, when the Captain and Maria kiss for the first time, a child near the front of house let out an audible “ew,” and Mr. Zane and Ms. Gambatese let the laughter roll, then pulled in tight for another, unscripted kiss.  This was magic to see.

One reviewer noted that Christine Brewer’s act one closer, ‘Climb Ev’ry Mountain,’ must surely have reached the ears of her Creator.  Knowing now that Chris sang that song without the amplification employed for every other actor on the stage, I am even more impressed.  She owned the song, and the audience was hers, baying our approval even after the houselights came up.  Chris’s curtain call erupted in shouts of “brava” and a nearly immediate standing ovation.  Seeing her . . . and hearing her . . . in this role was the reason I went to Chicago.  She paid off. This was luxury casting of the highest order. And I still become teary as I write about it.

The children were strong actors and singers.  But I have lamented before on this blog the tendency of all children on stage these days to be sassy, smarmy, sarcastic.  The von Trapp children would not sass each other, or an adult, the way these younger girls in particular did.  Why can’t directors guide kids to period-appropriate acting??  Good lord…..

I liked the Elsa, but this opera star didn’t know how to moderate her voice for musical theatre, resulting in what sounded like a belt voice that had no connection to her rich upper register.  And the Max — funny man, and dashing in his beautiful costumes — walked all over his own lines, never pausing for the laughter that he must surely have been receiving at each performance so far.

The orchestra was in top-form.  Again . . . this was luxury casting, having the Lyric Opera Orchestra in the pit for a lushly scored and detailed score for this show.

The Lyric decided to keep both of Max and Elsa’s numbers, thanks be to God.  They also interpolated ‘I have confidence’ from the movie version, and replaced ‘An ordinary couple’ with ‘Something Good’ in the second act.  These were decent and good choices.  And still the show clocked in at less than 2 and 3/4 hours.  The show felt a bit rushed at times — almost too cinematic — but I forgave the hurry because we all know and love those songs and want to hear them.

Director Marc Bruni and his team utilized the entire Lyric stage.  The kids sang part of ‘Do Re Mi’ on bicycles.  On bicycles! . . . an inspired and winning touch that opened up the show.  Little moments like this enlivened the production. The von Trapp home was lovely, and the abbey scenes were truly “am I really there?” moments.  The kids had some funny little bits to do, especially Gretl’s clapping at her brother’s high note in ‘So long, farewell.’

This was not a run-of-the-mill production!  And this redeemed for me the show from putrid, stillborn television version from December.  Nothing will ever wash away Julie Andrews and Christopher Plummer, which made this fresh look at the show entirely welcome and pleasing.

Finally, the nuns.  Sure, they were too closely and hotly miked.  But to have 20 singers of high training blasting those blessed choruses . . . well . . . Heaven had damn well better sound like that.  I that Christine will be the lead when I get there, because she can trumpet me to glory any day, especially with a tune like ‘Climb Ev’ry Mountain.’

[Having finished writing this, and searching for a picture to use, I ran across the Broadway World review of the show.  I agree completely with this author.]