When I took my first out-of-country trip in 1994, I took along a theme book – one of those black-covered, nearly square books that one can find a dollar store or in the school-supply aisle at Target.

And over the course of most of my trips away from the USA for the next ten years (and in several cases also in the USA to new-for-me places), I wrote.  A lot.  I included tales from the day, my own impressions of locations and activities, funny stories, interesting names of shops and beers and streets, and personal thoughts.  These travelogues are highly personal, as one might expect.

I fell off in 2005 on the first trip to China.  After writing religiously for the first two weeks of the trip, I stopped writing the day after AJ and I started talking about adoption.  The reason is simple: we were spending so much time talking that I just didn’t write any more.

I journaled more on my solo trip to China later that year, and again in 2006 on the humanities & urban planning trip.

Then I started blogging.  And the journaling became blog-oriented. 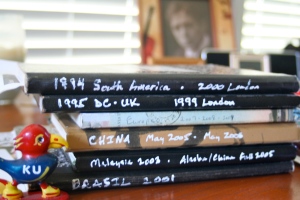 Nevertheless, I have a journal entitled Europe 2007, 2008, 2009 logging my trips to France, Germany, the Czech Republic, Italy, Austria, and Greece.

(These volumes are filled with people too, including Michael and Katie, BJ, Ken, Loo, and the GSE team in Brazil.  They are mirrors of the people around me at various times in my life.  Of course the 1994 volume also includes my family on the visits to Brazil and Argentina.)

And then came the iPhone.  Now when I travel, instead of sitting down at a restaurant or on the train to write, I pull out my iPhone and check email or the New York Times or play a game.

Now here’s the kicker: I think I’m the poorer for not writing in a journal.

This past weekend, I chose to leave my phone on ‘airplane’ mode, knowing that I would run up international data and usage charges if I started using the contraption in Canada.  As I sat down to meals, I felt a bit naked not checking in, so I pulled out a book or a magazine (always present in my messenger bag, along my camera, lip balm, and sunglasses) and read.

By Monday morning, I wasn’t feeling naked or out-of-touch, and was in fact relishing the freedom of no phone.  And then Monday afternoon – or actually Monday as I was sitting by the St. Lawrence River in Montreal , I found myself missing the joy of journaling, so out I set in search of a moleskin book or a theme book.  Sadly, the area of town where I was staying was so high-end that I didn’t find anything at all, and the shop at the art museum was closed for the day.

And here’s the decision: I am again taking up journaling when I travel.  The blog is fine, and I enjoy relating the tales of the day.  But . . . I need a place to just write in the moment.  I have three journals still in plastic, just waiting to be filled.  So I shall fill them.

One of my great joys is going back to read of my travels, years later and time zones away.  I shall build more of these joys in the coming years.

A sidebar: What will become of these volumes when I die?  I am hopeful that one of the nieces or nephews will be so enamored of travel that the journals will provide fodder for the imagination, and perhaps be a guide on the road.  I doubt that I have a book in these volumes, but after I’m gone, I wouldn’t mind one of the kids taking an interest in them.

Said I to Samson the Feist today, when he was just being too, too cute:

“You are just too adorable.  That’s right, you’re too ‘dorable.  In fact, you’re four ‘dorable.”

Say it aloud.  I at least made myself laugh.