1.  This state capitol building, as seen tonight from the bridge across the Missouri River.

Virginia the Landlady is owned by her dog, Shorty, who must have some Schnauzer in him.  Shorty the Dog has taken a liking to me.  If truth were told, I think Shorty the Dog takes a liking to anyone who scratches behind his ears and pats him on the head. 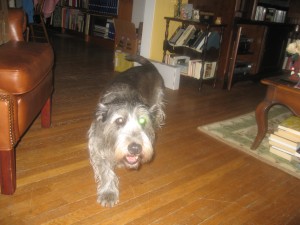 Karen’s kids were occupied today, so they didn’t attend the fiftieth wedding anniversary celebrations.  Kristen is actually here in St. Louis on a mission trip; Blayne, working in Springfield.

Beth and her family went spelunking today, as a surprise to their kids.  They then drove on over to Jefferson City.

My father’s brother, James A. Carter, and his wife, Margaret Hickman Carter, celebrate fifty years of marriage tomorrow.  The reception today was hosted by their two children, my cousins Brad and Cindy.  I drove to Jefferson City today and spent a few hours at what amounted to a fine and happy family reunion.

Brad and I were close for a number of years when we both lived in Kansas City and then in Lawrence.  Strange paths sometimes follow side by side.  Brad converted to Episcopalian, then I did.  Brad and I are both the sons of Baptist ministers.  We both ended up for a while in college admissions.  And we started on doctorates at the University of Kansas within a year of each other.

Brad really wanted to be in the Army like his father, who was a military chaplain for two decades.  Brad didn’t join, but now finds himself as an Associate Professor in the Department of Military History and the U.S. Army Command and General Staff College.  He has the civilian equivalent of the rank of Lieutenant Colonel, and teaches commissioned officers below his rank.  I think it’s a pretty cool gig.

Here’s the extended family from today.  (Click on the thumbnail for a larger shot.)

May her soul, and the souls of all the faithful departed, rest in peace, and may light perpetual shine upon them.